The Phillips Brooks House Association (PBHA) have been a permanent fixture in the grounds of the famous Harvard Yard for over 100 years.

The association’s building is located in the top left corner of the yard upon entering through Morgan Gate on Massachusetts Avenue and has been there since 1900.

The non-profit group was created in memory of Reverend Phillips Brooks, a preacher, a Harvard graduate and an advocate for social change. PBHA is run by Harvard students with a professional staff backbone and is a non-profit, public service organization that serves eight communities close to the famous school.

The communities served are Cambridge, Roxbury, Mission Hill, Chinatown, South Boston, South End, Jamaica Plain and Dorchester. PBHA currently run around 70 programs that aim to benefit people in these communities. Some of the established programs are Alzheimer’s Buddies, Deaf Awareness Club and HOOPS, which works with young people in Cambridge to build self-esteem through basketball.

Anwar Omeish is the current president of PBHA. The Harvard social studies student was elected in November 2017 but her term did not begin officially until February 1 of this year. There is 20 student officers and 13 full-time staff working at PBHA.

“Part of what the staff do is they hold some of the community relationships,” explains Anwar, who is due to start her senior year at Harvard this fall. “Students also hold lots of those, but staff hold them in a longer term. They’re coaching students but each of them has a set of programs that they are coaching. They also act as coaches for students.

“We also have other staff who work on the resources side. All the staff are hired by joint committees of student and staff.”

Of all the services that the long-standing organization provides, Anwar admits that the homeless shelters are the most demanding of resources. PBHA has three programs relating to the matter; Harvard Square Homeless Shelter, Harvard Square Summer Shelter and Y2Y Harvard Square, which caters for 18 to 24-year-olds experiencing homelessness.

“There’s a lot that goes into running a shelter as opposed to like doing an after-school program where you’re doing how many hours a week. A shelter is running all night. You need to make sure its staffed. You are also dealing with real people. It’s in a less controlled scenario.”

There are usually one or two applications per year for a new program to be established and ran by PBHA.

“What’s important to us in the application process is people are demonstrating community need. It’s a pretty rigorous application process because we ask for letters from community members really expressing that this is a need. We ask them to go through with our staff and our students a process to figure out if it’s feasible and if it seems in line with our mission.”

Due to its long-standing presence in Cambridge and surrounding communities, PBHA has a hefty yearly budget of four million dollars. PBHA officers do not use the quick and efficient method of sending emails to former students looking for a donation to the non-profit group. Instead, PBHA student officers handwrite all letters to make their request more genuine and personal.

“We also do appeals annually to alumni and students are responsible for writing those and students also often look for different grants they can apply to.”

Last April, PBHA hosted their 15th annual Summer Urban Program Auction. The Summer Urban Program is 10 camps across 11 different sites in Cambridge and Boston that are held for seven weeks every summer. Over 200 college and high school students work in the program that caters for 800 people between the ages of five to 19.

This year’s auction raised 60 to 70 thousand dollars. “We get donated items,” says Anwar. “Usually we will have three big items. For example, a trip to Disney World or like a trip to DC. The rest of the items are just various things, people just really like experiences. It depends on the year and what we get. It’s a fun night. We get to celebrate the work of the Summer Urban Program.”

Anwar’s successor as president of the PBHA will be elected this November and will take over at the helm from February 1, 2019. 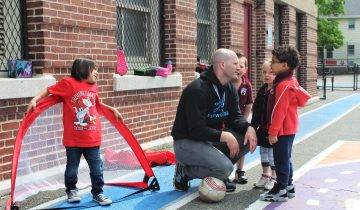