Last year Empower Success Corps (ESC) celebrated its 35th anniversary and the group has committed to its mission ever since its establishment to provide the highest quality consulting services to fellow non-profit organizations.

From their base in Downtown Boston, ESC has been offering their services to non-profits in Massachusetts, Rhode Island and southern Connecticut since 1982.

Julie Crockford is the executive director of ESC and through her leadership the group has just acquired the ESC of Northern New England which served the states of New Hampshire, Maine and Vermont. The acquisition means that the demands on the Boston based service will begin to rise extensively.

“When we acquired them [Northern New England], they already had clients. We acquired those contracts. Some of their projects had already ended for the year but we’re also picking up four active projects. We’re talking to a lot of organizations that we’re getting ready to work with.”

ESC currently has seven employees; four full-time and three in part-time positions. The consulting program had a roster of 150 consultants, but Julie realizes now with the addition of the rest of New England, ESC needs to find 25-50 more people willing to empower non-profits in New Hampshire, Maine, and Vermont.

ESC does not center their services solely around consulting. The group also has a fellowship program, which was established in 2015.

“In addition to the consulting services that we always provided, we are now also offering to fill interim roles at organizations,” Julie informs. “Instead of coming in with a small team of people to work on strategic planning or governance project, we can now embed someone in an organization for around 1,000 hours. It’s either half time for a year or full-time for six months.

“One example was an organization that was celebrating their 50th anniversary. They hired a 50th anniversary campaign director. It was a perfect one-year job. She planned the special events for the year. These were all based around the commemorations. They exceeded their goal.”

“We’re doing a marketing workshop that is open to the public. We had 50 people attend the last one that we did. The people that do those presentations are consultants.”

The latest addition to the range of services that ESC provides is the Discovery program. Julie firmly believes that the ‘Silver Tsunami’ is here. She believes that more and more people that are approaching the twilight stages of their career are having second thoughts about retiring.

“The discovery program is designed for people who are in transition, usually 50 and over. They’re ready to wind up their primary career but they really don’t know what that looks like. That silver tsunami is bringing a lot of people forward now realizing golf and tennis are not going to be enough.

“They have a series of interactive exercises to do with people and then we have transition navigators who are like councilors. They will check in with people after a workshop if they opt in to that service.”

One of Julie’s roles at the organization is program development. The executive director came up with the Non-Profit Executive Round Table. The program sees groups of non-profit chief executives coming together to discuss everything related to their business.

ESC offers the program, which consists of up to 10 sessions, for $875 per person which includes breakfast or lunch. The program takes places at ESC’s conference room in their Boston headquarters. Five groups of non-profit leaders have already met with the sixth group about to begin their discussions.

“It is a cohort of chief executives of non-profits. They meet once a month for two hours with a facilitator. The cohort lasts for nine or 10 months. It’s a place for CEO’s to let their hair down. People share all kinds of information and resources.

“We’ve had quite a mix of people in the groups. There might be somebody with a fifty thousand-dollar budget and somebody else running a large human service organization with several hundred employees and big federal and state contracts.”

Unlike other non-profits, ESC does not need to fundraise to stay afloat due to the services they provide to similar organizations.

“We’re fortunate in some ways that we do earn revenue based on our services. The fee that we charge a non-profit or a public agency for a project is based on the scope of the project. If it’s a consulting project and requires strategic planning and is going to take six to eight months, that gives us a range.

“Within that range, we then look at the budget of the organization. Half our clients have budgets under a million dollars. They’re paying a much smaller fee than an organization with a fifteen million or a twenty-million-dollar budget.” 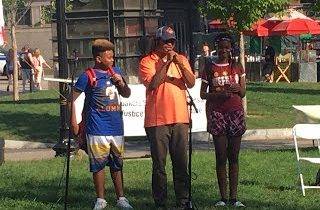