Boston by Foot is a non-profit organization that specializes mainly in guided walking tours and has been in existence since 1976.

The organization offers 95 different types of walking tours that are available from April to November, while private tours are available all year round.

Boston by Foot’s tours take place in the neighborhoods of Back Bay, Beacon Hill, Dorchester, East Boston, Jamaica Plain, North End and Roxbury. They also operate outside of Boston city lines in Brookline and Cambridge.

Tickets for Boston by Foot tours range from 10 to 20 dollars per person with a discount available if purchasing tickets in advance instead of at the location of the tour.

Boston by Foot also offers membership where a person pays a flat rate for the year and in exchange they receive free admission on all regular priced tours and discounts on the specialty tours and the Architecture Cruise.

The Architecture Cruise is the only tour on water that Boston by Foot provide. The non-profit work in partnership with the Charles River Boat Company who manage the boat and the Boston Society of Architects who help promote the tour through architecture channels.

The guided tour company’s headquarters is on Mount Vernon Street in the Beacon Hill neighborhood of Downtown Boston. The non-profit has two full-time and two part-time employees. Samantha Nelson has served as the executive director for six years.

Samantha’s workforce is the 200 people that volunteer as tour guides for the non-profit group. Each volunteer must participate in training to work as a tour guide. The six-week training scheme costs 95 dollars.

“There’s writing assignments along the way. There’s a final exam at the end. We really want our guides to have a broad base knowledge of Boston history and architecture but then also tour guiding skills. There’s a lot of public speaking and working on engagement techniques.”

“The price range is from 100 to 250 dollars for the group [for private tour]. If the groups are especially large, we will charge a per person rate. One of the things we try to do on both our public and private tours is keeping group sizes as small as we can. That’s something we think differentiates us from a lot of the other tour groups.

“We really prefer our groups not to go any larger than 15, 20 max. We aim for that, it doesn’t always work out, but we hope to keep our group sizes small and intimate to allow for questions and personal exchanges.”

As Boston has a considerable amount of history dating back to the late 1700’s, there are a number of companies that provide guided tours.

“Probably our biggest competitor in the walking tour area is the Freedom Trail Foundation. They’re the group that offer costume guides. But they’re really limited to the freedom trail.

“We also offer freedom trail tours, but our tours go much further afield and cover lots of different topics. On one level we just see them as competitors but at the same time we do a lot of different things.”

Boston by Foot have multiple streams of revenue. From membership fees to speaker training fees to additional funding from councils.

“We have an educational mission and we really want to raise awareness of all of Boston’s history and architecture and offer opportunities for people to explore. Most of our income is earned income from our tour revenue but it doesn’t cover all our expenses.

“Our membership program is very important to us. We do have a fundraising program as well as some support through the state. We are part of the Massachusetts Cultural Council. We receive a little bit of funding through the cultural council.”

The founder of Boston by Foot, Polly Flansburgh, is described by Samantha as the organization’s ‘greatest cheerleader and major donor.’

“In the seventies, she was inspired by the Chicago Architecture Foundation. They’re similar in that they offer volunteer led walking tours and they’ve expanded to include bus tours and all kinds of other things. But in the seventies, they were just getting their start too. Chicago is known for its architecture.

“She wanted Boston’s architecture to be just as celebrated. She founded Boston by Foot and recruited volunteer guides and has been going ever since. We do have one guide who has been with us for 42 years. It’s remarkable.” 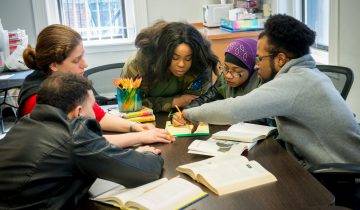