The Hub Theatre Company of Boston was formed in the spring of 2012 by Lauren Elias and Jon Geoffion. While Jon has moved away from Boston, Lauren remains involved in the group and is the only full-time person with two part-time employees.

Each year is regarded as a season at the non-profit organization. Season one was back in 2013 and since then, they have made 18 productions with the second show of 2018 just concluding recently. A season at the organizations lasts from January until November, ending before Thanksgiving.

The Hub Theatre’s mission is to make their productions open to everyone in society. “We’re trying to make theatre accessible to everybody regardless of economic barriers,” says Lauren.

“It’s all pay what you can. So whatever people can afford to pay to come to the theatre that evening. It varies, we’ve had people who are homeless come in and we’ve had someone give us five hundred dollars. We always say what would it cost to go to the movies is a good place to start.

“We don’t want to do that [set general fee]. For a lot of people that’s very hard. We want to make sure that everybody can come see shows not just people with disposable income. That’s the big part of our mission.”

According to Lauren, the number of people that turn up to auditions usually depends on what role is on offer.

“We put out an audition notice and see who comes. It depends on how many roles are in the show. Depends on what role it is, what we’re looking for.

Normally, the Hub Theatre schedule auditions to take place over two days but the process does not always end there as there can be call backs or video auditions. The organization normally uses Boston Center for the Arts in Back Bay.

The Hub Theatre also use the Back Bay neighborhood to host their productions. Their productions take place over the course of three weeks and are held at the First Church of Boston in the spring and the fall and Club Café in the summer.

The organization can not rely on ticket sales as a source of revenue due to their ‘pay what you can’ policy so Lauren must find other means to generate funds.

“Our primary source is grants. That’s the other big part of my job, writing grants. Because ticket sales never cover all that we need and any theatre that tells you ticket sales cover all of what they need is lying to you. Also, private [individual] donors, companies, banks, private trusts.”

Lauren wishes for several things to come true in the future but with an organization of its kind, it is not always possible.

“I’d love to get more full-time [staff] and I’d love to be able to pay people more than what I pay them now. I’d love to have longer runs.

“I’d love to find us a permanent home. Our very own theatre but that’s a pipe dream in Boston. We’re very lucky to have the spaces that we do.” 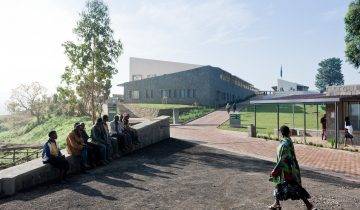