Gail’s Snowden retirement as CEO of Freedom House in 2013 resulted in a transitional stage for the non-profit. It was Gail’s parents, Muriel and Otto, who founded Freedom House in 1949 as an organization that committed to neighborhood improvement, quality education and racial and religious harmony in Boston.

Five years ago, Gail passed the torch on to Katrina Shaw to build on the legacy that she and her parents had created. Under Katrina’s stewardship, Freedom House moved into a new home at 5 Crawford Street in the Grove Hall neighbourhood of Boston last September.

Freedom House’s new base is a completely renovated 10,000 square foot building. The new space includes computer labs, a 200-seat auditorium and historic displays that pay tribute to the organization’s past.

Freedom House’s motto is Inspire, Graduate, and Give Back. The basic values behind this motto drives their four core programs: Preparing Urban Students for Success in Higher Education (PUSH), CommUniversity, Summer Intensive Institute and the Timothy Smith Technology Center.

PUSH consists of two components; PUSH High School which helps underrepresented students access post-secondary opportunities, with a focus on college; and PUSH College which helps college students graduate from college while preparing them to be active citizens that give back to their local communities.

For the PUSH College program, Freedom House collaborates with UMass Boston, Bunker Hill Community College, Pine Manor College, Roxbury Community College and the Benjamin Franklin Institute of Technology (BFIT). These institutions provide five programs including PUSH High School and PUSH College. In the PUSH High School initiative, the organization partners with a school named in honor of one of the founders, Muriel S Snowden International School in Back Bay, and the Jeremiah E Burke High School in Dorchester.

“We put coaches there,” says Katrina relating to the two high schools. “The coaches help students to navigate, to become active in their learning process and actually to graduate.”

The fact that Freedom House works with those five colleges does not mean they will not assist a student that wishes or is enrolled in a different third-level institution.

“We also have another student who got a really nice scholarship to Emerson College. That’s not on our list but we still coach them. We try to keep on top of what they’re doing. If we’re able to offer them employment or professional development, we do that. We just don’t have a coach that goes to the campus.”

CommUniversity works with colleges and universities to bring free and affordable college classes to the community.
“This year we’re working to offer free dual enrolment classes for students at our partner colleges. We’re working with BFIT, Pine Manor and Bunker Hill to offer those classes, so they come in and offer college classes here [at Freedom House building].

“We try to bring a lot of dual enrolment students so that if you’re one of our high school students, by the time you graduate from high school, you’re already exposed to college. You have had a successful experience in being able to navigate that process.”

The Summer Intensive Institute is open to both high school and college students. The high school aspect of the institute involves students getting employed by Freedom House for the summer time. This summer, Freedom House had 50 young people employed.

“We do a lot of professional development with them and leadership. We also give them college classes. It’s really an intensive that helps to hopefully boost their academic and professional skills like using the summer time to boost that while at the same time providing them income which most of them need.”

The college half of the institute involves Freedom House taking students on a trip into the wilderness or to a third-level campus where they provide a variety of training and team building activities.

The final program that Freedom House helps the non-profit connect with the wider community and not just young people is known as the Timothy Smith Technology Center.

Freedom House works with the Timothy Smith Network, an organization that provides technology to help build digital knowledge in communities. Freedom House have three rooms at their headquarters where there are computers available for the public to use during the fall, winter and spring.

“Anybody from the community can come in,” Katrina informs. “We have normal hours for people to come in and use the computers. People trying to start businesses or people who are trying not to lose their houses.

“Most people like to come here and get support. We offer it through the technology classes. Helping seniors to understand their smart phones or technology in general.”

Freedom House’s only fundraiser is the Champions of Freedom gala which takes place annually at the JFK Library in Dorchester. Four awards are presented at the gala including the Gail Snowden Legacy Award. The MC of the event is always a student.

“They have to manage it and lead it just like I would. A lot of responsibility to tell their story but not just to tell it. I need them to be empowered by their story.

“For me, it’s about telling your story in a powerful way. Our students do that. It’s nice to watch a student command an audience of like three or four hundred people.”

The non-profit receives funding from the likes of the Liberty Mutual Foundation, the State Street Foundation and the Boston Foundation. 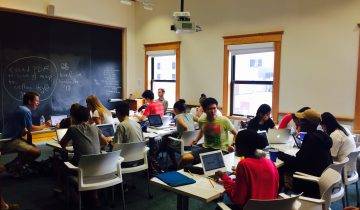