Earlier this month, Boston Scores celebrated 20 years of serving Boston youth with a gala event held in the Seaport District.

The Boston Scores story began in 1998 with the mission being to provide after-school soccer and enrichment programs to urban youth.

Initially, the non-profit only served students in grades three through five but has since expanded to cover kindergarten to 12th grade. Now, the organization works with 40 Boston Public Schools (BPS) and over 2,000 students on a yearly basis.

Boston Scores, headquartered from Jamaica Plain, currently has over 180 coach mentors providing the after-school program for young people around the capital. Most coaches are paid for their work, which makes staffing costs the number one expense for the non-profit.

“We always give preference to teachers from within the schools as our head coaches,” says John Maconga, the Executive Director of Boston Scores for the last nine years. “For our assistant coaches, we are more flexible. Often, assistant coaches will be a college student or anybody else that shares one of our passions and wants to give back to the youth in the program.”

“We want to have reliable coaches in the long-term. It helps to secure coaches that come back year after year. We have coaches who have been coaching with us for over a decade.”

Boston Scores have three categories of programs with one of them being Soccer and Health. This program is based on the US Soccer Foundation’s Soccer for Success program that aims to blend physical activity through soccer with nutrition and family engagement.

Soccer practice takes place two days a week during the fall season (September-December) and the spring season (March-June). Also, schools play against each other in soccer games every Friday during both seasons.

“The soccer practices and the enrichment happen immediately after school, right at the school,” John informs. “To allow for this competition, we transport the kids to all different parts of the city to play other schools once a week. It’s the day they wear their jerseys and take a lot of pride representing their school.”

Poetry, Creative Writing and Literacy is another program offered at the 40 plus schools that Boston Scores serves. This program takes places on non-soccer days from September to November.

“About two thirds of our students come from homes where English is not the primary language spoken. They often struggle with reading and writing.

“A lot of these kids have other challenges in their lives and it [program] gives them an opportunity to surface those challenges and to share them with their classmates in a setting where they feel comfortable and safe. Often, poetry is not so much about the weather but it’s about where they came from as a family and what their own personal aspirations are,” tells John.

The main component of the third category, Civic Engagement, is a service-learning program called One Hen. This program guides students through the fundamentals of starting a small business from micro loans to marketing to product development to sales.

“The kids actually design a business and they make a pitch to a panel of judges for funding. They operate their business. The unique piece of it is they don’t keep their profits, but they donate them to a charity that they have identified at the beginning of the program.”

One Hen is open to students in middle and high school. Elementary school students take part in a community service project which makes them consider social issues such as climate change, health and education and poverty.

The non-profit’s biggest fundraiser is the annual Scores Cup. The fundraiser is a corporate charity soccer tournament that for the last decade has taken place at Gillette Stadium, having previously been staged at Boston University’s Nickerson Field.

Corporations pay between $7,500 to $15,000 to enter a squad of 15 to take part in seven on seven games. The event is usually held in June or July with over 40 teams competing in either a competitive or a recreational division. This year’s event raised $375,000 for Boston Scores.

“More important for us is they also put that up on the Jumbotron every time they score,” says John. “It means twenty or thirty thousand fans of soccer are made aware that Boston Scores exists. We know that it has encouraged other people to Google and check us out and decide if they want to support us as well.”

Boston Scores 20th Anniversary Celebrations on October 11th was also a big source of revenue for the non-profit. The event, held at Morton’s the Steakhouse, saw Boston Scores invite founding members of the organization while Rahn Dorsey, the City of Boston’s Chief of Education, was keynote speaker. The night was an overwhelming success with $200,000 raised for Boston Scores.

“We hope we can address winter programming by having a facility that we control, where we can bring people in daily to run our programming even over the winter time.

“We’re in the early phases of speaking with potential partners to identify locations suitable for that. We think that’s going to be an important part of being able to reach that goal of doubling the number of students served on an annual basis,” concludes John. 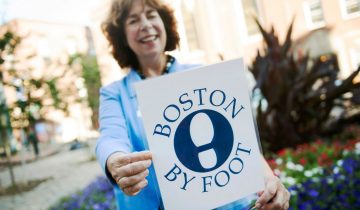