Last Sunday, Mayor Marty Walsh partnered with a number of Boston organizations to hold a Yes on 3 rally outside City Hall. Hundreds showed up to support the rights of their fellow citizens and call attention to the upcoming referendum on the midterm elections. Question 3 asks Massachusetts voters whether or not to repeal an existing law prohibition the discrimination of transgender individuals in public places. Voting Yes on 3 would uphold these basic civil rights that each and every Massachusetts citizen should have access to.

The Boston Globe expressed its support for Yes on 3, endorsed by its Editorial Board, saying;

“Unlike some other ballot questions Massachusetts voters have faced over the years, this is not a complex issue. What repeal opponents are pursuing is a solution in search of a problem. At a time when transgender rights are being threatened nationally in other areas, such as the military or health care access, now is the time to affirm equal rights protections for transgender individuals in Massachusetts by voting yes on 3.”

The rally’s Facebook page listed its items of action as follows:

Of the many outstanding speakers at the rally, three in particular stood out; Mayor Marty Walsh, who spoke about the importance of compassion for our peers, Jackie Ray, a Berkeley student who sang about her own life and struggles, and Leah Livingston, a parent of a transgender teen who called for all the parents in the crowd to come to the front and “stand near the beginning of revolution.” 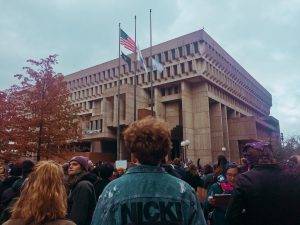 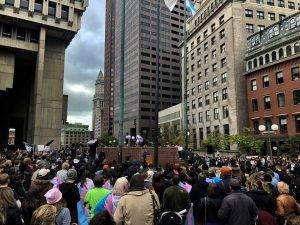